If you are interested in contacting OSI Affiliate Software about our story, please get in touch with Tariehk Geter via email: [email protected]


What you can do with OSI Affiliate Software 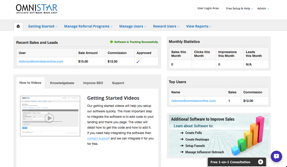 How To Increase Profits With An Affiliate Scheme
(April 17th, 2016)

FinancesOnline Review - A recent review from FinancesOnline, an independent software review platform. They awarded us with the 2015 Experts Choice Award and a Great User Experience Certificate. We even beat out our competitors in user satisfaction and FinancesOnline SmartScore.
(March 25th, 2016)

Why the new OSI Affiliate Software will Increase Your Sales
(April 25th, 2013)

How to Attract and Build In-Content Links for an E-Commerce Content
(November 6th, 2014)

How to Create Content for E-commerce Websites
(September 15th, 2014)

The Content Upgrade: 21 Examples of the Strategy That's Changing Blogging

4 Strategies for Using Twitter for Your Business
(January 22nd, 2014)